McLaren-Honda have announced  Volvo Trucks as an official supplier of trucks and haulage to its Formula 1 team.

The partnership will see McLaren-Honda take delivery of a brand new fleet of 24 state-of-the-art Volvo FH Series trucks for the duration of the four-year agreement. They will provide essential transport solutions and logistics support for both race team and hospitality operations.

The 24 Volvo FH 13-litre, 540hp trucks will comprise of three different specifications, including standard height, extra low, and top of the range, to cater for the ever-changing logistical requirements of the team at grand prix locations all over Europe.

The technology used on the exclusive flagship truck is inspired by the racing world, and is the first time a heavy goods vehicle has used its celebrated I-Shift automated gearbox matched to a new Dual Clutch, that offers unrivalled driveability in its class. The vehicle also features independent suspension using rack and pinion steering – features which have previously only been available in passenger cars.

McLaren-Honda will benefit from transport solutions that offer fuel-efficient, torque-strong performance, responsive engines and comfortable cabs. The Volvo FH Series boasts the latest I-See gradient technology that can save fuel, and engines that meet the Euro-6 emissions standard, therefore reducing environmental impact in line with the team’s status as the only Formula 1 operation to be awarded the FIA Institute’s Environmental Award for the Achievement of Excellence.

Jonathan Neale, Chief Operating Officer, McLaren Technology Group, said: “As well as looking for on-track efficiencies, as part of McLaren’s sustainability commitments we also look for improvements off it too. That’s why we’re very proud to partner with such a prestigious brand as Volvo Trucks, who are renowned for their innovative and high-performance heavy goods transport solutions.

“Away from the racing circuit, managing freight and logistics for a Formula 1 team presents a huge challenge in itself. Transporting McLaren-Honda’s entire race team operations across Europe in an efficient, reliable and, most importantly, safe manner is no mean feat, and we knew that partnering with Volvo Trucks as an official supplier would fit that bill perfectly.

“Like McLaren, Volvo Trucks prides itself on an enviable heritage in its field. They have been in operation for more than 80 years and built an impressive reputation for strong, reliable and economical transport products. We are looking forward to receiving the first trucks from the new Volvo FH fleet from April onwards, and working with Volvo Trucks to refine our logistics solutions as the relationship progresses.”

Mike Corcoran, Commercial Director at Volvo Trucks UK & Ireland, said: “We are extremely proud to have been selected as a supplier by McLaren-Honda. Our two companies share a number of values – particularly so in terms of our approach to quality and innovation, and we are both very much leaders in the use of technology. We are both winners in the race to find technological solutions to a very different set of transport challenges: McLaren on the track, and Volvo Trucks on the roads and highways of the world.”

Tobias Dahlgren, Brand Strategy & Implementation Director at Volvo Trucks, added: “It is great to see that our trucks, known to be leading in innovation and quality, will deliver transport solutions to a customer in one of the most demanding businesses like McLaren-Honda. For Volvo, being a global brand with a presence on every continent, this ‘co-operation’ provides the possibility for us to offer selected customers and partners a unique experience together with McLaren-Honda.”

”We have chosen the FIA WTCC as our global motorsport platform as it combines the cutting edge technology of our Volvo cars with exciting racing all over the world. The championship enables us to further develop our technology and utilise development from the racing circuits directly to our products for performance oriented Volvo customers,” said Niels Möller, COO of Polestar, the Volvo Cars Performance Brand.

The announcement comes on the day 30 years after Volvo Cars claimed the 1985 European Touring Car Championship title with the iconic Volvo 240 Turbo. Fast-forward to 2016 and Polestar Cyan Racing will carry the legacy to a new challenge, by taking on the world title with the brand new Volvo S60 Polestar TC1 race car. 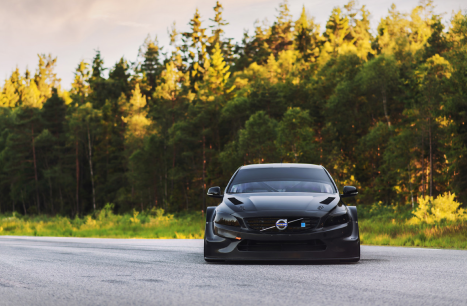 ”This is a great day for all of us at Polestar Cyan Racing to announce our assault on the FIA World Touring Car Championship, a programme that boils down to one thing; to bring the world title to Sweden,” said Alexander Murdzevski Schedvin, Head of Motorsport at Polestar.

Cyan Racing is the official motorsport partner to Polestar, the Volvo Cars Performance Brand, a cooperation started in 1996 with six STCC driver titles and seven team titles under its belt, most recently securing a double 2015 STCC title for the third year in succession.

Following an evaluation season in the 2011 WTCC and two seasons in the Australian V8 Supercars, 2016 marks the start of the Polestar Cyan Racing’s first multi-year programme in a world championship.

”We have got respect for the task ahead of us that we take on with absolute commitment. This is a long-term effort and we have got an extensive testing programme during the winter that will continue alongside our first WTCC season in 2016 that is all about learning,” said Christian Dahl, CEO of Cyan Racing.

The 240 Turbo dominated the racing circuits in Australia, Finland, Germany, Portugal, New Zealand and Sweden during the mid-eighties. Volvo had proved the strength of their concept with a downsized four-cylinder turbo charged engine against the might of the likes of BMW, Rover and Jaguar, all using six, eight and 12-cylinder engines.

The all-new Volvo S60 Polestar TC1 race car carries the legacy of the 240 Turbo, featuring a newly developed 4-cylinder turbo engine of 400 horsepower, based on the cutting edge technology of the new Drive-E Volvo engine family.

”To use the Volvo engine as base and not go for the available generic WTCC race engine for our car was a no-brainer. Volvo engines are suitable for racing purposes in terms of power, technology and durability, as we have proven previously in the STCC, V8 Supercars and WTCC. The Drive-E engine is a perfect example with its low friction technology and exotic materials. We have been able to utilise a lot of development work from earlier racing programmes as well as road car development and we are keen to get going against the best in the 2016 WTCC,” said Mattias Evensson, head of engine development at Cyan Racing.

Further information on the 2016 WTCC Polestar Cyan Racing programme, including driver line-up, will be revealed in due course.

Opinion : Volvo entering the WTCC is a great sign not only for the series but for motorsport in general, after a lull in interest due to global economic uncertainty manufacturers are coming back to motorsport. Volvo choosing the WTCC to showcase their increased commitment to motorsport is an interesting one, the series has been historically dominated by one manufacturer, the current being Citroen. To succeed Volvo will have to make significant investment into the program. From a personal perspective Volvo’s historical involvement in motorsport, specifically the BTCC with the 850 had a huge influence the cars I have chosen to drive having owned a V40, V50, & V60 I can say with confidence their presence in touring cars has been successful marketing tool for me! I wish the team all the best in the 2016 campagin and beyond