Our first instalment of #5ForTheFans has arrived! Was your question answered? Watch to find out… #AusGP #F1 pic.twitter.com/m9Q6zuAvOa

As the 2017 Formula One season got underway earlier today, Shell Motorsport & Scuderia Ferrari sat down to answers a series of questions from fans submitted through Twitter to Shell Motorsport. With Kimi, Seb and Shell’s Guy Lovett there is a sense of optimisation coupled with quiet confidence around their 2017 challenge.

Thanks to Guy for answering my question (@jonnywilde) in full and not giving the short response suggested by Sebastian!

Shell Motorsport will run more fan engagement sessions similar to this through the season, follow them on social media to get involved!

Jon Wilde examines the various aspects behind the changes of fuel and lubricant suppliers in the sport of Formula 1. Enjoy! 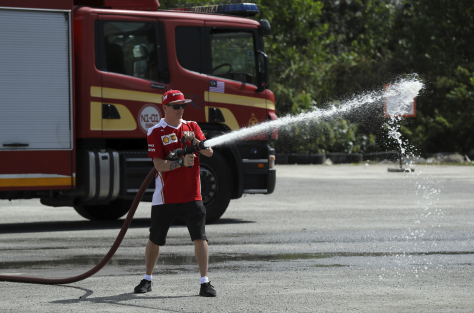 In the build up to this weekend’s Malaysian Grand Prix, Scuderia Ferrari’s Kimi Räikkönen took time away from the circuit to try his hand as a fire fighter in the latest project in the  the Shell V-Power Job Swap campaign.

Job Swap, as the name suggests, takes Scuderia Ferrari drivers away from the familiarity of an F1 cockpit and gives them an opportunity to experience other roles in which vehicle and fuel performance are critical for a very different reason. Following Sebastian Vettel’s job swap with a Paramedic earlier this year, Kimi set out to go one better working Mohd Uzair bin Abdullah – a veteran with Malaysia’s Fire and Rescue Department.

Unsurprisingly when commenting on his experience tackling a purpose build obstacle course in an 18 tonne fire truck Kimi remarked “The fire truck is such a different vehicle to my Ferrari car, and it was a new experience to drive it.”

Uzair mentioned, “getting the opportunity to work with Kimi to understand how he safeguards himself, helped me realise how similar we are in our jobs. Although we face different challenges, ultimately we both strive to protect ourselves so we can perform better at our jobs.”

“Initially, we were unsure what to expect from this unique activity. In the end, both drivers discovered the importance of preparation, and the vital role played by protection in the performance of both roles. Shell is committed to motorsports as an integral part of our Research & Development programme. Our innovations developed for the track help us make better fuels for our customers, enabling them to perform on the road with engines protected by Shell V-Power” said Shairan Huzani Husain, General Manager of Shell Retail Malaysia/Brunei.

With a strong performance from Scuderia Ferrari in the opening practice sessions for the Malaysian Grand Prix. Kimi and Sebastian look to be in a position to challenge for the top step of the podium this weekend. The team will be working closely with Shell to ensure the perfect balance between performance and efficiency as they seek to bring secure the best possible position in the 2016 Formula One World Constructors Championship.

Sepang, home of the Malaysian Grand Prix, has seen extensive redevelopment since the 2015 F1 race last March. The circuit first joined the F1 calender in 1999, this redevelopment represents this first significant upgrade since its construction.

Thankfully, rather than focusing exclusively  developing the pit and paddock area, the upgrades are largely focused on the circuit itself. Making racing and fans the main benefactors. The entire circuit has been resurfaced, and many corners have been re-profiled. Whilst the layout is unchanged, Italian Circuit design house Dromo have set out to maintain the essence of the circuit and create a new challenge in races.

Earlier this year, a round of the SHELL Advance Asia Talent Cup Championship took place at the venue. This race highlights the impact of the changes, in particular the increase in racing lines into the final corner.

Dromo are the same design house tasked with the upgrades of the Monza circuit, which following the F1 contract extension now appear to have been postponed. 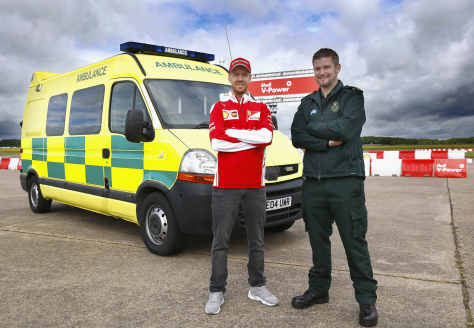 As the Formula One circus heads into the traditional summer break Scuderia Ferrari’s Sebastian Vettel took some time to try his hand at a very different kind of high speed performance vehicle.

In the first of  series of Job Swap Challenges developed by the Shell V-Power team, Sebastian Vettel handed over the keys of a Ferrari 488 GTB to Alex Knapton, a South Central Ambulance Service paramedic with more than 1300 call emergency call outs to his name, who in return gave Vettel the keys to his florescent pride and joy! The challenge; which driver could set the fastest lap time in vehicles somewhat different to those used in their day job! Although with Alex behind the wheel of a Ferrari 488 GTB with a top speed of over 200 mph, and Sebastian trying his hand in a 3 tonne Ambulance with a top speed of only 88 mph, the advantage going into the challenge was clear.

After a morning of mutual tutoring the two went head to head against the clock, check out the results here:

Speaking about the challenge Sebastian commented: “Paramedics play an essential role in motorsport around the world and not just in Formula 1. They need to perform to such high standards every day because people’s lives depends on them” 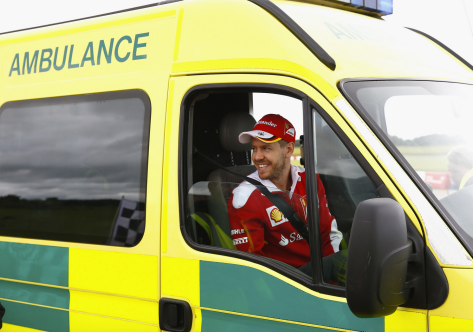 Alex went on to add “Getting the opportunity to swap the ambulance for the Ferrari 488 GTB was a dream come true! It was an unbelievable experience to get that close to one of the stars of Formula 1. Sebastian was on great form coaching on high performance driving tips and joking about the lack of a radio in the ambulance.”

The continually novel approach from Shell to bring the virtues of Shell V-Power Nitro + to life are incredibly impressive. The innovations Shell bring to the track through the long standing partnership with Scuderia Ferrari, whilst focused on bringing performance to the racing team, are ultimately developed with the forecourt and the customer in mind. 99% of the compounds used in fuel used to go racing is seen in V-Power fuels for the road.

Hopefully Alex’s experience will have convinced him and the South Central Ambulance Service to use Shell V-Power in future… … maybe that will help him find that missing 7 seconds!

The impact of  2017 changes in Formula One technical regulations have received significant media attention in recent months. With wider tyres and increased front and rear wings coming our way, the visual impact of a 2017 F1 challenger is set to be quite dramatic. An area which has been explored in less detail has been the impact the regulations may or may not have on fuel performance.

Speaking to select media at a Shell V-Power event at the Bruntingthorpe proving ground in Leicestershire following the British Grand Prix, Sebastian Vettel and Guy Lovett, Shell Motorsport Innovation Manger, spoke about the regulations and the possible implications.

Guy Lovett: ” It [the regulation changes] gives us a little more opportunity, the token system is abolished so the engine development side of things is more open and its the same on the fuel side. The important thing is for us to exploit our close relationship with Ferrari and ultimately develop the best package. From a fuel perspective, that doesn’t necessarily  change how we work, it just gives us more opportunity”

Sebastian Vettel  “from a driving point of view, next year we will have more grip, more downforce, but that means also more drag down the straight which might slow us down a bit. And the fuel consumption might go up because you have more drag. Equally we go faster through the corners, so it will be interesting to see from that front what we need to do in the car. will we be saving fuel or can we be flat out?”

You can view the interview in full through the Shell Motorsport Periscope Channel Here:

Questions around the impact of 2017 regulations from JWGP can be seen at around 10 minutes into the broadcast.

Over the course of 2015, Shell V-Power introduced five fuel compound upgrades to Scuderia Ferrari, these upgrades delivered a performance improvement of around 0.5 seconds per lap. Such a rate of development and performance gain is a testament to the strength of the partnership. The development race continues into 2016 with Shell set to introduce a new fuel compound for Scuderia Ferrari in the coming races. With such a significant regulation change coming in 2017 Shell have already begun to divert resources towards the 2017 programme. After the summer break the resource split between seasons will be around 50/50, with a complete shift to 2017 planning coming soon after.

A key defining factor in 2017 compound development will be final conclusion of the technical regulations. At this time it has not been confirmed if Fuel tank capacity will increase from 100kg to 105kg or if the current regulation will be maintained. As mentioned earlier in the interview with increased drag through the aero regulations likely to increase fuel consumption, if fuel tanks remain at 100kg Shell will focus their efforts seeking efficiency gains. If the fuel tank capacity increases a greater focus on performance from fuel can be expected.