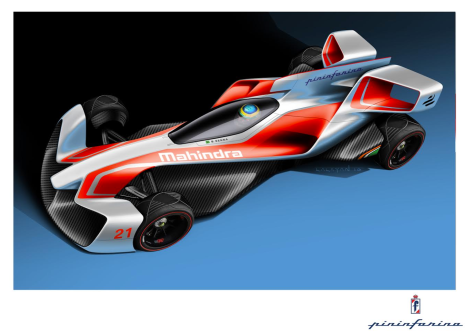 Ahead of this weekend’s Formula E action from the streets of Paris, the Mahindra Formula E team have continue to put Formula One teams to shame was a flurry of new technical partners and concepts.

Coupled with the opening of the Formula E tender for the sesaon five update of the series chassis, Mahindra have partnered with Pininfarina to develop and release these stunning concept images of a possible future for the next generation of Formula E machinery.

“Formula E is one of the most exciting signs of the changes underway in the automotive world as well as in motor racing. Its success is the proof. Exercising our creativity on these sketches allowed us to imagine the evolution of this formula. A possible contribution of Pininfarina to the future development of a Formula E car would be a highly motivating challenge, fully consistent with our mission of creators and innovators in the automotive field”.

Those working in the world of Formula One must be asking themselves how Formula E continue to attract such blue chip partners. On the Magneti Marelli partnership Dilbagh Gill, Team Principal of Mahindra Racing Formula E Team said,

“We are thrilled to announce thispartnership here in Paris. Mahindra Racing has developed a very strong relationship with Magneti Marelli over the past few months while developing our powertrain for the next season.”

“As an established EV manufacturer and an FIA Formula E manufacturer, we have a mandate to drive the future of EV technology, and that begins with developing the most innovative ideas and components.”

“We have found a shared ambition in Magneti Marelli and we look forward to the first test of the M3Electro. Mahindra Racing also welcomes Magneti Marelli as a commercial partner and we are proud to display their branding on our car for the last five races of this season and into season three.”

“We are proud of the partnership with the Mahindra Racing Formula E Team in the very important and challenging FIA Formula E Championship. Magneti Marelli has brought innovative technologies to multiple racing categories. Formula E allows us to exploit our knowledge in strategic components for hybrid and electric propulsion.”

“Performance, efficiency and reliability are going to be key elements to race in season three and we believe that thesolution developed with Mahindra Racing will be able to demonstrate the capabilities of Mahindra and Magneti Marelli which will help the team to be successful in the FIA Formula E Championship.”

Mahindra Racing aims to stimulate and curate a conversation on the future form and next generation technology of Formula E, encouraging fans to share their thoughts on these designs on Facebook, Twitter and Instagram using the hashtag #FormulaEConcepts.