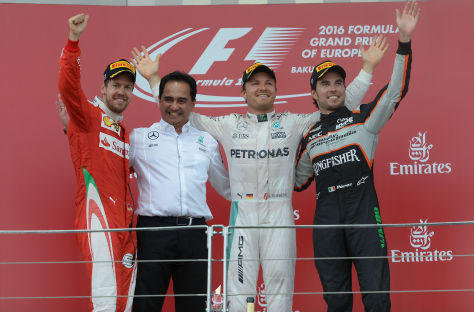 The very first Grand Prix in Azerbaijan was won by Mercedes driver Nico Rosberg, who started from pole and stopped just once, passing from supersoft to soft tyres, without ever losing the lead.

The top six started on the supersoft and stopped only once for the soft tyre, between laps 8 and 21. This meant that their soft tyre stints lasted up to 43 laps, in the case of Ferrari’s Kimi Raikkonen. The result was achieved despite a higher wear rate than expected owing to warmer temperatures than those seen in practice and qualifying.

The highest placed of the three drivers to have instead started on the soft was Force India’s Nico Hulkenberg, who finished ninth from 12th on the grid. Hulkenberg stopped just once, while the best of the two-stoppers was Red Bull’s Daniel Ricciardo, who used all three compounds nominated for Azerbaijan: supersoft, soft and medium, which was the case also for his team mate Max Verstappen.

“The Baku grand prix contained a number of surprises; firstly with track temperatures still in excess of 50 degrees after one third of the race, and with very little drop in temperature throughout. And secondly because the much-anticipated safety cars never materialised. As expected, it was a one-stop race for the winner, with quite high wear and low degradation despite the long lap length and very high top speeds. We saw a number of different strategies being tried, including some very long stints even on the supersoft, which was key to Nico Rosberg’s victory on this spectacular track.” 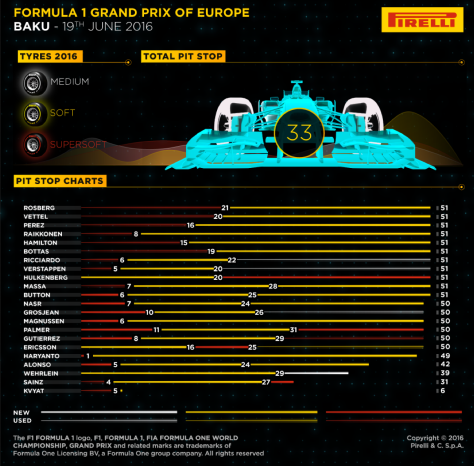 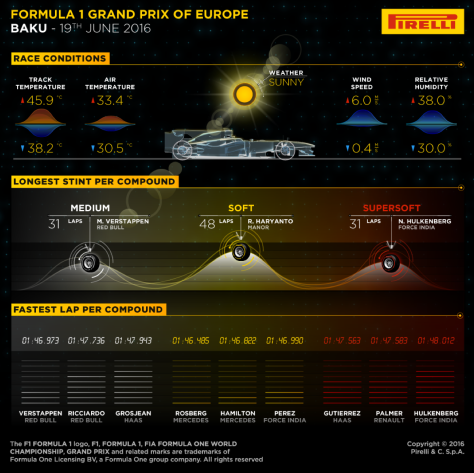