In the FIA World Motorsport Council meeting, held today in Paris, approval has been granted to the President to formalise the contract between the FIA and GP2 promoter to establish the FIA Formula 2 Championship.

This mover will complete the FIA’s single seater pyramid from Karting through the Formula One. The WMSC minutes do not reference a timeline to support the transformation, but 2016 is likely.

Any changes around the GP3 series have not been referenced.

Bernie Ecclestone and Flavio Briatore are the promoters and owners of the GP2 / GP3 series  (incidentally they partners also hold the rights to the GP1 name) . Both series are powered by Mecachrome engines, branded as Renault in the GP2 series. Mecachrome are one of the manufacturers participating in the FIA’s recent request for an expression of interest in alternative engine supply within F1. It is possible this engine design could play a part in future engine development plans for F2.

As Manor Marussia F1 Team development driver Jordan King returned to Europe to prepare for the Bahrain & Abu Dhabi rounds of the GP2 season with Racing Engineering , he took some time out to review his experiences of the 2015 season and discuss his prospects for the future.

Jon Wilde (JW): Hi Jordan thanks for your time today, let’s kicks off with what you’ve been up to over the past month or so, How did you find your time with the Manor Marussia Team in Austin & Mexico?

Jordan King (JK): Austin was a great experience; I attended all the briefings and observed on the pit wall obviously there was a lot to take on board for the first week so it was nice to do a second straight after as I knew a bit more about what was coming.

JW: With the rained off qualifying and condensed Sunday schedule. What was the atmosphere with the team like over the weekend in Austin?

JK: The atmosphere was great, it was strange to be at the race circuit working with a team but not have the stresses of driving, but as I say that the race was very stressful as obviously you want the best for the Manor cars and one crashed out and then we were close to getting points so I was getting very into the race and very stressed myself.

JK: GP2 has been amazing this year! It really has been a childhood dream for me to race in the series so I do feel like I have come a long way in my career but there is still a long way to go. My highlights have been the first race coming from last under safety car to finish 4th and finishing 2nd in Spa, although I was a bit annoyed as I wanted, and could have won! Having Alex as my team mate has been great he is incredibly experienced so has had a lot to offer the team and has helped my development and understanding as well.

JW: What are your expectations for the final rounds of the GP2 calendar in Bahrain and Abu Dhabi?

JK: I would really like to get a few more podiums which I know are manageable. Moreover I want those podiums to be in the feature race not just the sprint.

JW: What plans do you have for 2016? Do you expect to stay with Racing Engineering and GP2? Can we expect to see you behind the wheel of a Manor F1 car in testing or free practice sessions?

JK: I am planning to stay in GP2 and that will more than likely be with Racing Engineering I don’t see any reason to move and I’ll be doing all 3 days with them in Abu Dhabi testing to work on next year.

I am working towards getting in an F1 car but you know how this world works it is very hard!

JW: Has the Manor Mercedes partnership had any impact on your plans?

JK: no, not that I am aware of anyway.

JW: You’ve had some great sponsors supporting your career, how important do you think it is for a driver to focus on developing commercial deals as well as developing skills on track?

JW: Is your father still involved in the Manor management structure? After the difficulties of last season the team seem to have been able to bring stability and finally build towards a competitive future, what changes have you seen in the team since joining?

JK: He helped get the team back on their feet but has really taken a back step since then and started other work. As for the team they are making steps, small steps but steps and it does look like they are heading in the right direction long term.

JW: What advice would you offer to anyone trying to get into Motorsport today?

Go for it 100%! I have loved every minute of it, it will be stressful and disheartening at times but keep trying and you will have a great time while living your dreams!

Thanks to Jordan for this fantastic insight into the world of a driver moving up through the development path. Congratulations on qualifying an excellent 5th on the grid for tomorrow’s  GP2 feature race in Bahrain , and we hope to see you behind the wheel of an F1 car very soon! 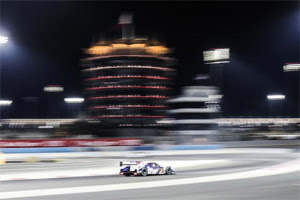 With the size of your sponsorship portfolio rather than the success seen in your racing career continue to be a key determining factor in a driver stepping from junior racing category into F1, drivers whose skills are focused on keeping their car between the white lines are increasingly looking towards a career in endurance racing.

Owing to the cancellation of the German Formula One Grand Prix earlier in the season, in one month from now GP2 for the first time in the series history, take on the support race role for the World Endurance Championship in Bahrain. Following what promises to be a thrilling weekend of racing, the World Endurance Championship will run a series of rookie test sessions. These sessions will offer a selection of drivers from GP2, who may have otherwise lacked the budget to further advance their career, the opportunity to test championship winning LMP1 machines.

The test line-up will include Richie Stanaway, already competing the WEC with Aston Martin in the LMGTEPro category, who will be testing the Audi R18 e-tron Quattro. Mitch Evans, who has already discussed he ambition to move towards endurance racing, testing the currently dominant Porsche 919 Hybrid, and 2013 GP2 runner up, DS Virgin Racing Formula E, and LMP2 driver Sam Bird testing the Toyota TS040 Hybrid.

Does this test represent a seed change in the mind-set of drivers and promoters towards Endurance Racing? No longer should it be perceived exclusively as the place for retired Formula One drivers (although the Colombian variety of these will be represented and very welcome!) Endurance racing offers drivers a formidable racing challenge, arguably superior in many respects to Formula One. The World Endurance Championship is rapidly becoming the home of a driving elite. How long will it be before Formula One drivers don’t just dip their toe into the Le Man’s experience, but when it comes to contract negotiations consider a seat with an LMP1 team as a true alternative to an F1 team.

This event in Bahrain is a huge step forward for Motor Racing.

Significant progress has been made in negotiations with the promoter of GP2 regarding the establishment of the final step in the FIA’s single-seater ladder; the FIA Formula 2 Championship.

Discussions remain ongoing with the intention of finalising an agreement.

Opinion: In amongst the F1 2016 calendar confirmation the FIA have publicly commented for the first time on progress around the progress of GP2 morphing into F2.  GP2 organisers have commented on the prospect but in recent months talks appeared to have stalled. It’s fantastic to see logic being applied to the development of the FIA single seater ladder. It will be interesting to see the timing around the transition and the FIA drivers license points requirements to enter the series.