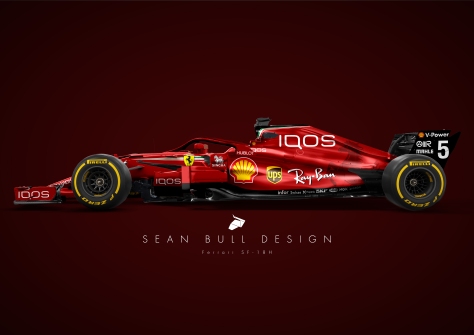 Following yesterday’s article in which the prospect of Scuderia Ferrari carrying IQOS branding was explored, designer Sean Bull got in touch to share his vision of a possible 2018 livery for the Scuderia.

Philip Morris International, as title partners of Ferrari, will likely seek to include IQOS naming rights within a partnership announcement in order to maximise coverage and brand exposure. As such the team may well be referred to as Scuderia Ferrari IQOS, following the previous Scuderia Ferrari Marlboro naming convention.

Sean‘s concept livery harks back to Ferrari livery style of the early 90’s using black as a secondary colour throughout the design. The use of black on the front and rear wing would likely appeal to the team’s designers, with the fine detail of aero intricacies being more difficult to make out in rival team ‘spy shots’.

It remains to be seen if Philip Morris International will seek to promote its e-cigarette business through Ferrari in 2018, based on fan response to the rumour, the move would be positively received. 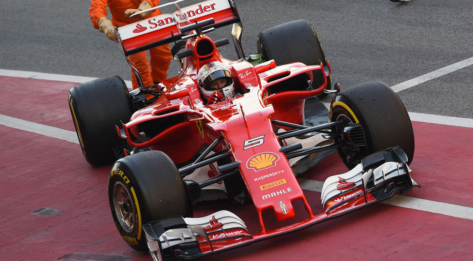 As the clock struck midnight on December 31st 2017, many sponsorship relationships throughout the F1 Grid reached their conclusion. In the coming weeks and months, numerous new agreements will be announced at both a team and championship level as attention focuses on the season ahead. For myself as a lifelong fan of the business of Formula One, now aspiring to develop a career in this side of the sport, this period between commercial contract expiry and new contract announcements can be fascinating.

No team will encourage media to make a story out of the end of a partnership, so don’t expect any press releases confirming a departure, instead head to the partner’s section of the website of the team you follow and see if you can spot the brands or names suddenly missing from the list.

A well-publicised partnership expiration is that of the relationship between Santander and Scuderia Ferrari.  A partnership many believe will be replaced by the promotion of long-term team partners Phillip Morris introducing e-cigarettes to Formula One with the brand IQOS. If true, e-cigarettes could represent a high-value sector of sponsors for F1 moving forward, assuming advertising challenges can be overcome, and OEM’s including Mercedes and Renault are comfortable with the association.

Intriguingly, whilst Santander has been removed from the Scuderia Ferrari Website, it remains on the McLaren (no longer McLaren Honda) website. Santander, whilst no longer a brand represented on the McLaren livery have been partnered with the Woking based team since Alonso first joined the team in 2007.

Can you spot any other team websites with mysteriously missing partners? There are some out there which may surprise…