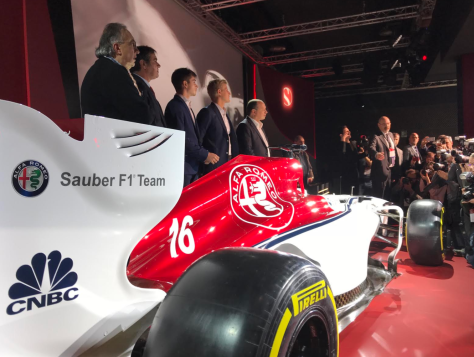 Underestimate me at your peril. The resounding subtext pointed in no uncertain terms towards Chase Carey and Formula One from Sergio Marchionne at the launch of Alfa Romeo’s title partnership relationship with the Sauber F1 Team this weekend.

The long rumoured return of Alfa Romeo to Formula One with the Sauber F1 Team was finally confirmed earlier this week. The announcement of the return was closely followed by an invitation to the worlds motoring media to attend a press conference in Milan. On the face of it, the objective of this event was to confirm 2018 Sauber F1 Team drivers Charles Leclerc and Marcus Ericsson with Antonio Giovinazzi taking on a 3rd driver role and to unveil the 2018 livery theme. What transpired was a master class in negotiation from Chief Executive Officer of Fiat Chrysler Automobiles (FCA) Sergio Marchionne.

After a period of observing, tinkering, and to some extent grandstanding, the final races of the 2017 Formula One season have seen Liberty Media begin to share their vision for the future of Formula One. Until now, key protagonists set to be impacted by this vision have largely kept their views to themselves or at least limited opinions to isolated sound bites. Sergio Marchionne and FCA, have now firmly stuck their head above the parapet to makes themselves and their views clear for all.

Elaborate team and sponsor launches are something which for many had been consigned to the history books with the vast majority of team unveiling now taking place minutes before pre-season testing on a chilly pitlane in Barcelona. Yet this weekend saw the team finishing plum last in the championship host over 400 media representatives from all over the world at the Alfa Romeo Museum situated just outside of Milano launch a sponsorship less than one week after the end of the season. With media from the US being flown in First Class with 48 hours notice, it would be conceivable to say that the budget of this single event exceeded the marketing and activation budget of the team for the entire season. Sergio Marchionne wanted an audience for his message, and he wanted his audience to leave the event singing his tune.

In addition to the media contingent, Sergio Marchionne and FCA invited newly reappointed FIA president and former Scuderia Ferrari Team Principe Jean Todt to attend and speak at the event, alongside Formula One CEO Chase Carey, with Sauber F1 Team owner Pascal Picci. So with the stage set, Sergio Marchionne opened the event, in Italian, focusing on the great news of Alfa Romeo returning to Formula One. This was followed by Mr Todt waxing lyrical about the passion of the brand and its significance with motorsport. Chase Carey then took to the stage to applaud FCA for bringing Alfa Romeo back to Formula One, he acknowledged their history in the sport and spoke of his enthusiasm for their return. Then the big reveal, driver line up confirmation and an indicative view of the team livery.

What followed was pure mastery. Sergio Marchionne returned to the podium for a few more words. In the space of 10 minutes, he politely panned the Michael Buffer COTA show, make clear FCA & Ferrari did not want to be part of a ‘dumbing down’ of Formula One, asserted the sport should be focused on technology over entertainment, and what could be the knock out blow, “our partnership with Sauber is until 2021, if we don’t like the direction the sport is taking at that point, we will leave and we’ll take them with us”

This rhetoric was delivered not only to a room full of media, but squarely at Chase Carey seated directly below the rostrum at which Sergio Marchionne made his speech.

Following this, team owner Pascal Picci and team principle Frédéric Vasseur returned to the stage for an open Q&A session. I would not like to suggest any questions were ‘planted’ but the position of FCA strength ahead of any negotiations with Formula One over the future of the sport was highlighted at every available opportunity.

Of course, Chase Carey and Liberty Media did not get to where they are today by chance, I have no doubt they have more than a few tricks up their sleeve as they head into negotiations with Formula One teams over the future of the sport. Sergio Marchionne has simply set the tone of future discussions and made it very clear he is more than happy for any discussion to be made in full view of the media and the Formula One fan.