As a Driver, if you compare the gravitas of succeeding in Formula One to Indycar, on the face of it, Formula One is the ultimate accolade. Exploring the physicality of each series tells a slightly different story.

Current era F1 cars are both lighter and more powerful than an Indycar. They produce more downforce and utilise higher performing brake performance. However, they also feature power steering. An Indycar is heavier, less powerful, produces less downforce and critically has no power steering.

In recent interview for JWGP Felix Rosenqvist following his test for the Chip Ganassi team at Mid Ohio commented, “it doesn’t matter how fit you are, the first few laps in an Indycar destroy you. I’ve not driven in F1, but compared to my time in DTM, GT’s and F3, the physical strength required to drive those cars is much greater”

You see it in an Indycar driver’s physique, they train to build physical upper body strength much more than cardio work. Completing an Indycar race is far more physically demanding than an F1 race under current regulations. Current leading F1 drivers such as Daniel Ricciardo have acknowledged this and called for the 2017 regulations to place more emphasis back towards the driver.

The variety in circuits is another unique component to the challenge of Indycar. Over a single season driver’s will visit; street circuits, road courses, long ovals, and short ovals. Each configuration requires a very different style of driving ranging from man handling a car around St Pete, to driving like you re holding a cup of tea you can’t spill around Indianapolis. Drivers can’t afford to specialise in one style of racing. To win in Indycar you have to be strong in all circuits. As Will Power explains in the film below from Mobil One’s The Grid:

Ultimately Formula One elevates a driver’s profile to global super stardom, but is Indycar the real human test of raw skill? With former F1 driver, now Indycar winner Alex Rossi opting to complete his season in Indycar rather than return to F1 with Manor Racing this season perhaps the tide is turning. Indycar has created an environment in which driver skill and strength is key, the economics of the series enable drivers to earn a living with reduced pressure around finding a budget to race.  Has Indycar quietly become the new home of the real racing driver?

Alexander Rossi is back in the Manor Racing fold as Official Reserve Driver. Although he’ll be racing in the 2016 IndyCar Series, he will also be making history as the first driver to perform a Formula 1 role simultaneously.

Alex will attend 11 Grands Prix with Manor Racing, where he will work with the engineers and drivers to help develop the MRT05, contribute to team and partner marketing activities and be available to deputise should he be required to compete at short notice. His first F1 event will be the Russian Grand Prix in May.

“We’re very fortunate to have someone of Alex’s calibre in the role of Official Reserve Driver. The fact that he’s racing full time in the IndyCar Series this year was simply a challenge to be overcome; something we’re pretty good at. We need a safe pair of hands for the role, which always carries the potential to have to step up to race, but also someone who can really contribute to the development of the car. For Alex, F1 is still unfinished business. He did a great job when he drove for us in five of last season’s races and he’s a highly rated and valuable part of our line-up. He does have one heck of a schedule ahead of him and it’s a commitment that only the most disciplined of drivers would be able to manage. We’re confident he’s the man for the job.”

“I’ve invested most of my career in F1 and I’m not one to kick my heels and wait for things to happen, so this is my way of staying sharp and prepared. It was disappointing to miss out on a race seat with Manor Racing this year; everyone knows I pushed and worked hard for it. As Official Reserve Driver though, I have a very complimentary dual program at the highest level of motorsport. IndyCar Series is the premier category of open wheel racing in North America and extremely competitive. I also have the privilege of racing with a championship winning team, Andretti Autosport. I’m confident this experience will add to my role as a very important cog in an F1 team’s wheel. My schedule this year is demanding, but no more than a full time F1 schedule. I will attend 11 Grands Prix, only five of which take place during the IndyCar season, and I am certainly used to the travel demands of the F1 calendar. It’s great to be back with a team I know and with whom I share a mutual respect and passion for the sport we love.” 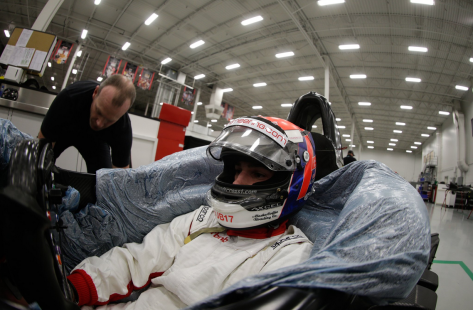 During a seat fitting for his newly announced seat with the Andretti Autosport Indycar team,  Former Manor Grand Prix Team driver Alex Rossi took time out to share details on how the deal came together, what it feels like to be heading back to the United States and the excitement around participating in the 100th running of the Indy 500. 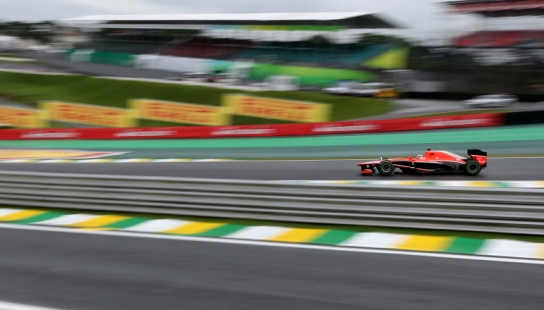 This weekend’s Brazilian Grand Prix will mark Alexander Rossi’s last Formula One race of the 2015 season, with the American returning to GP2 with Racing Engineering for the closing rounds of the season in a bid to secure a strong 2nd position in the championship.

Rossi can return to GP2 with his head held high having exceeded any expectations the F1 world may have placed upon him having outperformed his team mate, Will Stevens, 4-0 in races and thus far sharing the honours in qualifying.

Rossi’s place on the F1 grid in Singapore, Japan, the United States, and Mexico has served to increase interest in the sport across the US both with fans and business. With a soon to be five races under his belt, a healthy sponsorship portfolio and an open door into the American market, Rossi must be a strong contender for a full time seat with the Manor F1 team for 2016.

The prospect of a wet weekend in Brazil may allow Rossi and the Manor F1 team to dare to dream of those elusive first points of the year.

In this short preview filmed for Mobil 1 The Grid, Rossi previews the Brazilian Grand Prix, talking through his experiences at the circuit dating back to 2008 and his time in Formula BMW:

To celebrate Alexander Rossi’s time with Manor F1 team in 2015, Mobil 1 The Grid have launched a competition to win a special edition cap signed by the driver, to enter the competition follow this link for more details.

Opinion:  Thanks to Mobil 1 The Grid for posting this preview. Alex Rossi’s presence on the F1 grid for the 2015 COTA Grand Prix is great news for the Circuit and Formula One in general. Having an American driver on the grid should serve to further endear the track with locals and heighten the atmosphere at this fantastic venue. the COTA circuit manages to encapsulate some of the greatest corners in recent F1 history and bring them together into one single thrilling lap.

Rossi and the Manor team promised additional sponsorship backing from the Austin GP onwards, with his Californian roots perhaps Alex has been able to tap into the Silicon Valley Billions, adding to the mid season Airbnb partnership, I can picture the Uber Manor F1 team now! A strong showing in Austin should put Rossi in a good position for a full season campaign with the team in 2016.