Pirelli will bring the following three compounds to Bahrain and China for the second and third rounds of the 2016 Formula One championship:

With the compounds for the Australian GP already announced this means the ultrasoft will not appear on the calender until the Russian GP, the 4th race of the season.

These are the tyres that Pirelli has said must be used at some point in the race:
One set of P Zero White medium
One set of P Zero Yellow soft.
Each driver must have both these sets available for the race, and must use at least oneof them.

There are the tyres assigned for Q3 in qualifying:
One set of P Zero Red supersoft
Following on from the 2016 regulations, each driver must save one set of the softest of the three nominated compounds for Q3. This set will be given back to Pirelli after Q3 for those who qualify in the top 10, but the remaining drivers will keep it for the race – as is the case currently.

The teams are free to choose the remaining sets; making up 13 sets in total for the weekend.

The tyre choices so far:

With the 2015 Formula One season complete, Pirelli have put together this series of fantastic infographics to summarise the season. 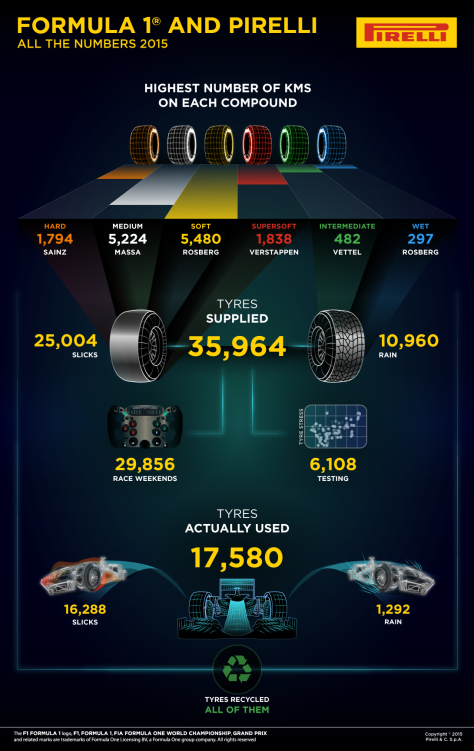 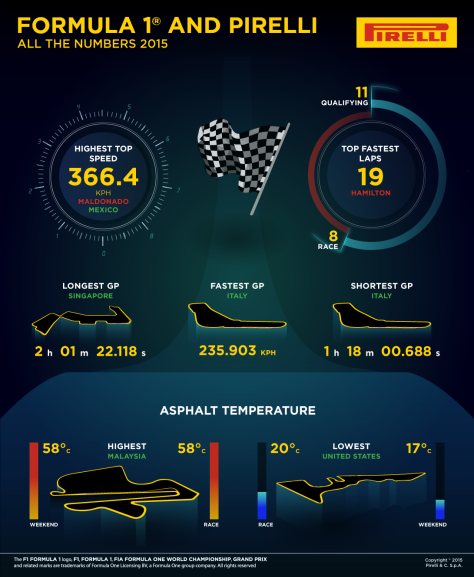 Pirelli will bring the following three compounds to the opening round of the 2016 Formula One season in Australia:
P Zero White medium

These are the tyres that Pirelli has said must be used at some point in the race:

Each driver must have both these sets available for the race, and must use at least one of them.

There are the tyres assigned for Q3 in qualifying:
One set of P Zero Red supersoft

Following on from the 2016 regulations, each driver must save one set of the softest of the three nominated compounds for Q3. This set will be given back to Pirelli after Q3 for those who qualify in the top 10, but the remaining drivers will keep it for the race – as is the case currently.

The teams are free to choose the remaining sets; making up 13 sets in total for the weekend.

After its meeting in Paris, yesterday, the FIA World Motor Sport Council formally approved the new 2016 Tyre Regulations for Formula One.

The top 10 at the end of qualifying will still have to give back the set of the softer compound nominated for Q3, and start the race on the tyres with which they set their fastest time in Q2 (the same rule as is the case currently). All other drivers will be able to use the set that is saved for Q3 during the race.

In the FIA World Motorsport Council meeting, held today in Paris, approval has been granted to the President to formalise the contract between the FIA and GP2 promoter to establish the FIA Formula 2 Championship.

This mover will complete the FIA’s single seater pyramid from Karting through the Formula One. The WMSC minutes do not reference a timeline to support the transformation, but 2016 is likely.

Any changes around the GP3 series have not been referenced.

Bernie Ecclestone and Flavio Briatore are the promoters and owners of the GP2 / GP3 series  (incidentally they partners also hold the rights to the GP1 name) . Both series are powered by Mecachrome engines, branded as Renault in the GP2 series. Mecachrome are one of the manufacturers participating in the FIA’s recent request for an expression of interest in alternative engine supply within F1. It is possible this engine design could play a part in future engine development plans for F2. 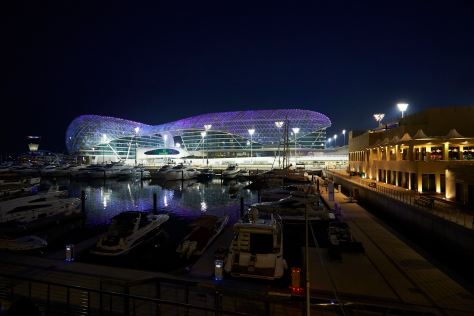 The 2015 championship concludes at a venue that is very familiar to Pirelli: the spectacular Yas Marina circuit at Abu Dhabi, which has been used for testing and a pre-season launch by the Italian firm, including the world’s first wet-weather test run at night. Due to the smooth asphalt, the two softest tyres in the range will be brought: soft and supersoft, as used at the slowest track on the calendar in Monaco (and at four more grands prix). The Abu Dhabi Grand Prix is held from late afternoon into the evening. As a result, track temperatures tend to drop over the course of the race, meaning that the pattern of tyre behaviour is slightly different to normal: another complex variable for teams to factor into their strategy calculations.

Paul Hembery, Pirelli motorsport director: “It’s incredible to think that the 2015 season is over already: it seems a lot less than a year since we were at Abu Dhabi for the final race of 2014. With the championships decided the teams can obviously push to the maximum and our tyre choice in Abu Dhabi provides them with an interesting challenge: while the surface is very smooth, the tyres are still pushed quite hard due to the track layout, so tyre management becomes an important part of the strategy, particularly under acceleration in the traction areas, where it is very easy to spin the wheels. This is the same nomination as last year, so we’d probably expect another two-stop race, but track temperatures can be quite variable as the sun goes down and this can clearly have an effect on the tyres and therefore strategy. Just two days after the chequered flag on the 2015 season, we already begin testing for 2016: there will be a dedicated Pirelli tyre test from 9am to 9pm on Tuesday 1 December, with all the teams running one car to test some 2016 constructions and the new ‘ultrasoft’ tyre, which will carry purple markings at next year’s races.”

The biggest challenges for the tyres:
The falling track and air temperatures over the course of the race (which does not start until 5pm) means that the track tends to get faster as the grand prix goes on, a phenomenon that is accentuated by falling fuel loads.

Just like the previous round at Interlagos, the track runs in an anti-clockwise direction at Abu Dhabi: a relatively unusual feature, which can sometimes cause physical problems for the drivers.

The first part of the circuit effectively consists of a series of non-stop bends, which heats up the tyre compound. The compound then gets a chance to cool down on the long straight, with the cars on full throttle for around 15 seconds, with the equivalent of around 800 kilograms of downforce.

Last year’s strategy and how the race was won: A two-stopper was the winning strategy for Lewis Hamilton last year. He started the 55-lap race on the supersoft, before changing to the soft on laps 10 and 31. Then 24 laps later, he became 2014 world champion!

Expected performance gap between the two compounds: 1.0-1.2 seconds per lap.

Rosberg was able to hold off his team mate Lewis Hamilton – on a similar strategy – from start to finish, maintaining his advantage from lights to flag without losing the effective lead of the race. Track temperatures remained warm, albeit cooler than the 50 degrees seen during qualifying, while the threatened rain did not occur. The track temperature progressively dropped however throughout the race, ending up at 35 degrees, which reduced wear and degradation in the later stages.

The top three all used a three-stop strategy, but there was a wide variety of tactics at work behind them. The highest-placed two-stopper by the end of the race was Ferrari’s Kimi Raikkonen, who used the strategy to gain fourth by the end of the grand prix, finishing just off the podium behind his Ferrari team mate Sebastian Vettel.

All the drivers started on the soft tyre with the exception of Toro Rosso’s Carlos Sainz and Lotus driver Pastor Maldonado. The Venezuelan completed a long opening stint on his medium tyres, while Force India’s Nico Hulkenberg completed an even longer closing stint with the same compound – underlining the variety of strategic thinking in the closely fought race. Red Bull’s Daniel Ricciardo also adopted an alternative strategy to climb seven places from his grid position, switching from soft to medium on lap two.

Paul Hembery, Pirelli motorsport director: “With weather conditions warm but uncertain, strategy was always going to be a key element of the Brazilian Grand Prix. Rosberg’s considered approach to tyre management over the course of the whole weekend once again proved to be a key element of his victory, which was very well deserved. However, there were a number of drivers operating a two-stop race. We saw some long stints on the medium compound that helped drivers gain track position.” 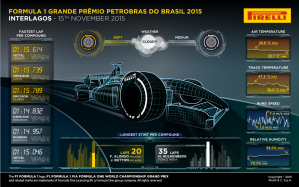 Mercedes drivers went first and second in both free practice sessions at Interlagos, with Lewis Hamilton using the P Zero White medium tyre to go quickest in the morning and Nico Rosberg setting fastest time of the day on the P Zero Yellow soft tyre in the afternoon.

Today was the first opportunity that the teams had to assess tyre wear and degradation on each compound heading into the Brazilian Grand Prix weekend: traditionally a key factor, due to the constant cornering during a short but frenetic and bumpy lap.

As is often the case at Sao Paulo, the weather conditions were inconsistent, with warm track temperatures in the morning but light rain at lunchtime, which dried up before the start of FP2.

The drivers used the morning FP1 session to reacclimatise to the track and determine the behaviour of the medium tyre, in ambient temperatures close to 30 degrees centigrade. In the afternoon, both the medium and soft tyres were used during FP2: complete with some long runs to assess wear and degradation on each compound with different fuel loads. With a high risk of rain returning, the teams were all straight out on track in FP2, aiming to maximise the opportunity of collecting useful data.

The session times were slower than their equivalents in 2014, due to a dirty surface and some damaged kerbs to last year, which meant that the drivers modified their lines in order to avoid them.

Paul Hembery, Pirelli Motorsport Director: “Friday’s two free practice sessions followed the established pattern of running, although the threat of rain – which never really materialised – perhaps added a certain pressure on teams to gather as much information as quickly as possible. We’ve certainly got plenty of data to analyse now, and while wear and degradation is typically high in Brazil, we are not noticing anything out of the ordinary from a tyre perspective so far. The track is still evolving so tomorrow’s comparative data will be interesting too, but we should be in for a busy race with plenty of strategies and pit stops. As always, the unknown factor seems to be the weather.”
FP1:
1.Hamilton 1m13.543s Medium new
2.Rosberg 1m14.062s Medium used
3.Vettel 1m14.168s Medium used

Following an agreement ratified by the FIA World Council, Pirelli will hold a tyre test in Abu Dhabi after the final grand prix of the 2015 season.

Teams have been asked to run preferably race or reserve drivers, and they will not be allowed to try new parts nor alter the cars during the test.

All of the teams involve will field one car each, but participation is voluntary.

Pirelli will define the test programme for each car. The tyres used during this test will not be considered as part of the testing allocation for 2015.

The Italian tyre firm requested the Abu Dhabi session in order to develop a new construction for the 2016 slick tyres as well as test the new Ultrasoft compound, which will form part of the P Zero Formula One range next year.

The Ultrasoft will be distinguished by purple markings on the sidewall. This colour was chosen by fans who were asked to vote for either purple or silver via Pirelli’s social media channels. Purple was a resounding winner, capturing 85% of the votes.