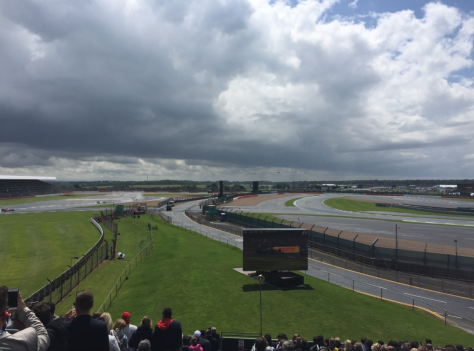 The circuit, build around a former military airstrip is flat and huge. Two features that don’t lend themselves to great visibility for the race attending fan. Most grandstands are situated on the outside of the circuit, this results in limited viewing. Modern F1 circuits are designed with the race attending fan in mind. It is possible to see a large percentage of the track from a single viewing point. Silverstone was not designed in this way. That was until the circuit was remodelled in 2011.

I realise writing a review on a 5-year-old circuit upgrade may feel a little unnecessary, but there are many race fans similar to myself who avoid Silverstone because of the outdated perception that the circuit isn’t great for spectators. I am happy to report this is no longer the case. Courtesy of my good friends at Shell V Power I was given two tickets to the Silverstone Six hospitality stand for the British Grand Prix. The unit is situated on the infield of the Maggots- Becketts complex, which in itself is an incredible view. Adding to this the grandstand is elevated and overlooks the new sector of the track with views of the loop and Aintree corner. In total from a single vantage point I could see 6 corners, and over the course of the 2016 British Grand Prix witnessed some of the most incredible overtakes I have seen in modern F1.

Now to be honest, during GP2 and GP3 Races I found myself getting confused with the old and new circuit layouts, tracking cars around the lap at the wrong time, but I think that just shows my age. The Silverstone Six Grandstand gave me an entirely fresh perspective of the entire circuit. I remembered why I enjoyed Silverstone in the first place. As a spectator you get a true feeling for the challenges of the circuit and for the speeds drivers are taking into corners. The Silverstone Six experience is something special. Arriving at 8:10 AM on Sunday morning, 5 minutes before the GP3 race started we had a full breakfast buffet available to us, and even Mumm Champagne for those feeling eager! Leading up to the race a full lunch menu was available. Whilst the weather in the minutes leading up to the race was not great for fans in a grandstand the entire hospitality unit we sat in (the Brabham suite) decamped to our seats for the race. The race itself was a thriller! Another great addition to Silverstone has been larger clearer screens around the circuit along with radios playing commentary of the race to ensure you can keep up to speed. Many times during the race there was so much going on it was hard to chose between sections of the circuit or the screen to look at. Following the race the suite stays open until 6:30, offering an afternoon snack and further drinks. The quality of food and drink in the suite is fantastic.

Silverstone have done a great job at tackling the inherent issues of the circuit. They have invested in sound and logical infrastructure and made the event something to be proud of.

Finally, I would like to thank the staff at Silverstone Six for making the day so memorable. It is easy to forget how tough it must be to pull off an event such as the British Grand Prix. The entire team should be proud.