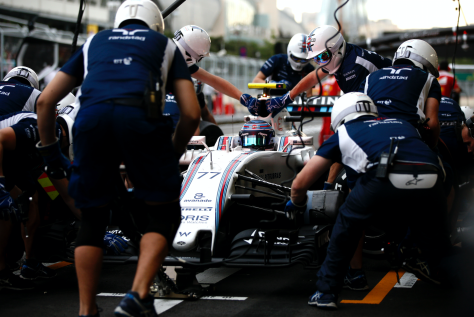 Williams Martini Racing set a new record for the fastest recorded pit stop at the Grand Prix of Europe. The team finally broke the magical 2 second barrier with Felipe Massa’s stop. Williams are the first team to officially complete a pitstop in which all 4 tyres are changed in under 2 seconds in Formula One.

After a series of calamitous pitstop performances throughout the teams 2015 campaign, for 2016 the team employed a process manager to analyse possible areas of improvement and implement change. One change has been to introduce a 21st person to the process. The person is responsible for monitoring the pitlane throughout the stop and signal (through a hand-held remote) when it is safe to release the car. This additional person reduces the number of tasks to be completed by the front jack man, and as a consequence has allowed for increased focus and improved efficiency. By allocating only single tasks to individuals in a pitstop process focus can be absolute. No doubt rival teams will be looking to emulate the Williams pit stop process in races to come.

For the 2016 Season DHL are awarding a Fastest Pitstop award after each Grand Prix. Williams have won this accolade at every race this season.

One thought on “Formula One: Williams break the 2 second pit stop barrier”