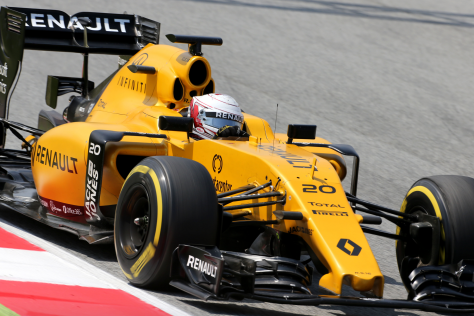 The first in season test of the 2016 Formula One Season came to a close earlier today. With limited information on fuel loads and strategy from the teams it is hard to draw too many conclusions, other than to comment that both Renault and Red Bull Racing have given positive feedback on the B-Spec Power Unit. The unit seemingly ran trouble free and may now be introduced in Monaco, one race earlier than planned.

Kevin Magnussen – Renault Sport F1
“That was a full day for me and a productive one. It’s definitely been a positive test. The power unit feels stronger and has better driveability and there are some other good improvements too.”

Nick Chester, Technical Director – Renault Sport F1
“Today has been a highly positive day of testing following on from Esteban’s good work yesterday. Kevin gave us everything we needed over a wide range of simulations and assessments. We’ve now run for two long days with the latest specification power unit with no major issues or concerns.”

2 thoughts on “Formula One: Stats & Facts from the Barcelona Test”