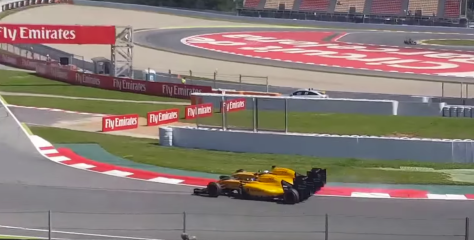 Spectator footage has emerged revealing how close  a second set of teammates came to colliding at the Spanish Grand Prix on Sunday. In the final lap of the Grand Prix Renault Sport F1 team teammates Jolyon Palmer and Kevin Magnussen came within centimetres of colliding in the final sector of the lap.

The incident was not captured in the world feed broadcast, but was caught be spectators in this footage:

Whilst unnoticed by the world feed the incident was seen by the FIA, Kevin Magnussen was awarded a 10 second penalty to his finishing time demoting him to 15th place in the overall race standings.

“Car 20 [Magnussen] was on a new set of soft tyres, and Car 30 [Palmer] was on an older set of hard tyres leading the driver of Car 20 to have significantly better grip and speed. However, the Stewards determined that Car 20 could not have reasonably expected to make the corner of Turn 13 without colliding with Car 30, which was subsequently forced off the track.

“The Stewards imposed the penalty referred to, which was converted to a time penalty after the race as the cars were on the last lap”

Neither team or driver have formally commented on the incident.