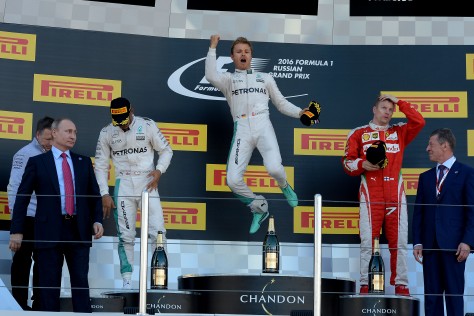 Nico Rosberg has continued his run of victories (started at the 2015 Mexican GP) by winning from pole in Sochi, starting on the supersoft tyre then switching to the soft on lap 21. In second place was his team mate Lewis Hamilton who used the same strategy to make up eight places from 10th on the grid: the result of a technical problem before Q3.
Most drivers used a one-stop supersoft-soft strategy, but an alternative tactic was used by both Red Bull drivers, who were caught in the incident at the start that caused a brief safety car, which influenced strategy. Daniel Ricciardo and Daniil Kvyat both switched to the medium tyre, with Kvyat completing more than 50 laps on this compound to finish 15th from the back, despite picking up a 10-second penalty.
A different alternative strategy was adopted by Force India’s Sergio Perez, who switched to used soft tyres on lap one under similar circumstances, then switched to more used softs with just over 20 laps to go. Perez finished in the points but he was not the highest-placed two-stopper: that was Williams driver Felipe Massa in fifth, who completed a final stint on supersofts. Only six drivers stopped twice, with the rest all stopping once.
Following a cool day yesterday, temperatures during the race were much warmer.

Nico Rosberg
This weekend really went really perfectly for me. Already in Qualifying I had found a perfect balance and that continued throughout the race, which was fantastic. I had a great start and from there was able to control the pace at the front. Thank you so much to everybody at the factories for building such an amazing car. If you have a car like this, you are really able to push to the limits and that’s an awesome feeling. Lewis drove really well to come back up to second so quickly, so well done to him too. The only down side to the weekend was to see that reliability is becoming a bit of a concern, as Lewis obviously has a problem yesterday and both cars had issues during the race today. But we have a great team behind us and I’m fully confident that we will sort this out. It´s unbelievable to go into the European races with four wins and I really look forward to Barcelona now. Thanks, Russia – you were very good to me!

“The early safety car certainly added an interesting dimension to the race, with a number of drivers trying an alternative strategy. In the end, Daniil Kvyat completed an entire race distance on the Medium compound, in an era when there is more load going through the tyres than there ever has been before in Formula 1 history. We saw some other different strategies: Fernando Alonso, Kevin Magnussen and Romain Grosjean were able to maximise their opportunities with a one-stop strategy to make up several places compared to their grid positions. Generally speaking, the one-stop strategy was the way to go as we predicted, with low wear and degradation across all three compounds. 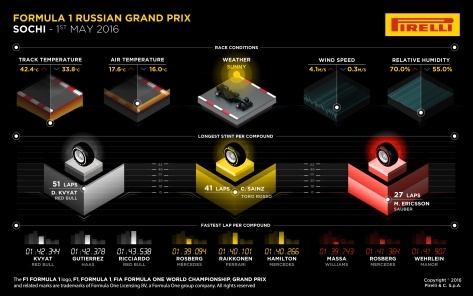