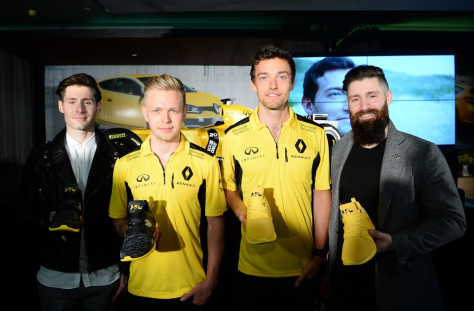 Renault Sport Formula One Team will put its best foot forward in its quest to propel itself up the Formula 1 standings thanks to a new partnership with Athletic Propulsion Labs, a world leader in Men’s and Women’s athletic footwear and apparel.

The APL® Ascend is designed as the ultimate training shoe that can withstand the rigorous demands the Renault Sport Formula One Team encounters on and off the track. Using APL’s proprietary Propelium® technology, the lightweight 8oz. Ascend is the perfect intersection of performance and luxury. The shoe boasts an impressive list of features including a full length honeycomb mesh and minimal overlays for breathability and a sock-like fit, an articulated eye row that allows the foot to flex and an outsole, inspired by the shape of a feather, that incorporates natural motion flex grooves that react to every movement. Additionally they look very cool!

Cyril Abiteboul, Managing Director, Renault Sport Racing
We are really happy to welcome Athletic Propulsion Labs to Renault Sport Formula One Team. Since returning to Formula One we have aimed to position ourselves as dynamic and creative and to partner with brands who share this ethos. APL definitely fits these criteria. Adam and Ryan Goldston have come up with a product that is both innovative and attractive and at the very forefront of footwear technology. They’ve managed to go beyond being ‘just’ a trainer manufacturer and become a genuine lifestyle brand. We’re looking forward to working with them on track with the race team and creating lots of exciting off-track synergies.

APL branding will feature on the floor of the RS16 as pictured: