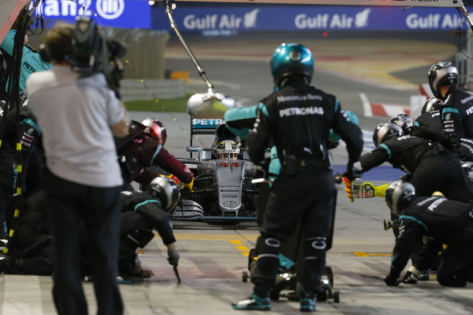 Mercedes AMG Petronas have confirmed excessive tyre wear on the medium compound tyre prevented Lewis Hamilton from challenging for the win at the Bahrain Grand Prix. Following a difficult start in which Hamilton’s W07 again struggled to get away from the line, Valtteri Bottas made contact with the Brit as he approached the first corner.

Whilst the severity of the impact was not sufficient to retire the car, Hamilton lost several positions and Mercedes estimate that the loss of downforce due to damage to the floor and sidepod may have cost Hamilton up to 1 second per lap in performance. In a bid to recover from this early misfortune, Lewis and the Mercedes team attempted to switch from a planned 3 stop strategy to a 2 stop. To achieve this Mercedes fit Lewis’ only set of Medium compound tyres available for the race weekend on lap 13 of the race, on the same lap as Rosberg fitting soft compound tyres and one lap later than Raikkonen who also switched to the soft compound tyres.

Unfortunately this gamble did not pay off for Lewis, with his performance on the harder compound tyre relative to his immediate competitors unlikely to be sufficient to improve his overall finishing position. On lap 28 Lewis stopped again, this time fitting a set of worn super soft tyres, thus reverting to a 3 stop strategy making his final stop for soft compound tyres on lap 41.  Had the 2 stop strategy been successful with Lewis maintaining the gap to his teammate after the first round of pitstops he could have saved a total of 24 seconds, the time lost in a pitstop, which could have delivered a finishing position ahead of Raikkonen in second and may have lead to a challenge for the lead overall.

“We decided to try something different to get him [Lewis] past by taking the medium tyre and targeting a two stop strategy. Initially this looked promising, as he was gaining on Kimi despite running a slower compound after the first stops. However, it soon became apparent that the medium was degrading as badly as the soft, so that strategy unfortunately began to unwind quite quickly. We therefore converted him back to a three stop – but of course Ferrari shadowed and we then had to cover that in turn with Nico. At that point, with all three cars on the same tyres, we had to just hold position to the end”