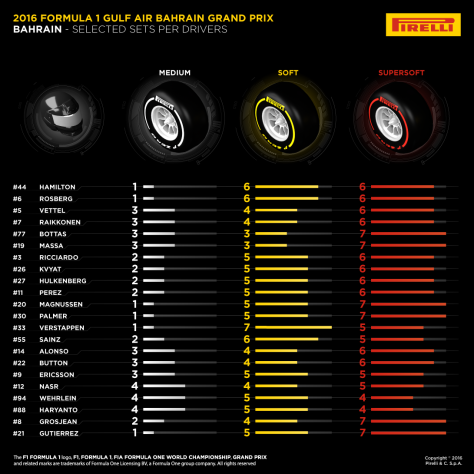 The FIA has communicated to Pirelli each team’s tyre choices for the forthcoming Bahrain Grand Prix.  It is important to note that driver choices on tyre selection for the early rounds of the championship were made before pre-season testing.

As you may expect in the second round of the championship teams have tending to make the same tyre selection for both drivers. With only Sauber and Haas F1 electing to vary the weighting of tyre choice between drivers.

Both Scuderia Ferrari and Williams have weighted tyre selection away from the soft compound  opting to focus on the medium tyre (hardest available) and the super soft. This suggests both teams will maintain an aggressive approach to race strategy, with multiple stints on the super soft likely.

It should also be noted qualifying regulations are not resolved at the time of driver tyre selction.