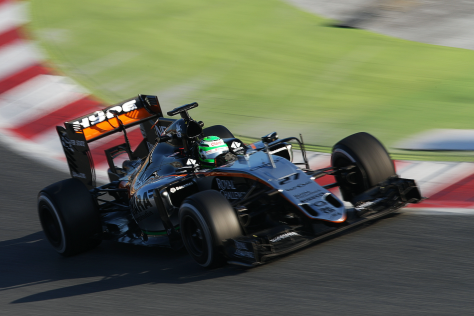 Sahara Force India looks ahead to the start of the 2016 season in Melbourne’s Albert Park.
Nico on Melbourne
Nico Hulkenberg looks forward to another strong showing in Melbourne.
Nico: “Melbourne used to be my unlucky track, but I scored points in 2014 and 2015, so I think I’ve broken the curse! I don’t know of anybody in the paddock who doesn’t enjoy this event. After the long winter you arrive in Melbourne and everybody is pumped and ready to get the season started. The weather is great, the city is cool and you get a lot of energy and positivity from the crowd and the buzz in the paddock.
“Sector two is my highlight of the lap: you go from a slow chicane to a straight and into a fast left-right combination that is tricky to get right. It’s a high-speed corner where you can make or lose a lot of time and it can set you up for a good overtaking spot on the approach to turn 13.
“To be quick at Albert Park you need a car that is well settled. It’s about braking late, using the kerbs and being precise. Tyre degradation is usually high so the new tyre rules could open up some different strategy options.
“The opening race of the season often throws up surprises: anything can happen and we need to put ourselves in a position to make the best of any opportunity that comes our way.”
Sergio on Melbourne
Sergio Perez gets ready for one of his favourite events of the season in Melbourne.
Sergio: “It feels great to be going racing again. Winter has been long and I have been missing the atmosphere you get from a race weekend. Going to Melbourne is a great way to start the year and it’s one of my favourite races. Everyone is very friendly and relaxed and I always enjoy those races close to a big city.
“I’m a big fan of street tracks and Albert Park is a real challenge. You can’t afford to be rusty because it’s a circuit that doesn’t forgive your mistakes. Getting a perfect lap together is quite difficult because it’s quite stop-start. You need to be good on your brakes and strong out of the traction zones. Overtaking is always difficult – even though there are some good spots like turns three and thirteen.
“No matter how many laps you do in testing, you never really know where you are compared to the other teams. So I don’t want to say too much. As a team we feel quite happy with what we achieved in Barcelona and that’s the main thing. The car has been reliable and we’ve made a good step forward compared to last year. I think we can go to Melbourne knowing that points are achievable.”
Vijay Mallya, Team Principal
Team Principal, Dr Vijay Mallya, reviews the team’s progress in testing and sets his sights on points in Melbourne.
Vijay, how would you sum up the team’s start to the season?
“The introduction of the VJM09 has been very smooth. The team has done an excellent job over the winter and testing has gone largely to plan: we’ve covered just shy of 4,000km and the car has shown good reliability. It means we can head to Melbourne feeling pretty comfortable with the work we’ve done and our understanding of the new car.”
What, if anything, did you learn about the pecking order from two weeks of testing?
“I don’t think there will be any major shocks in Melbourne. The general status quo from the second half of last year appears to have been maintained. I think it will vary from track to track, as always, but on the whole I think we can pick up where we ended last year.”
What would represent a good opening race for Sahara Force India this weekend?
“Melbourne can always throw up some surprises and unpredictability, but I’d like to see us get some points and start the season as we mean to go on. We want to be qualifying and racing inside the top ten from race one.”