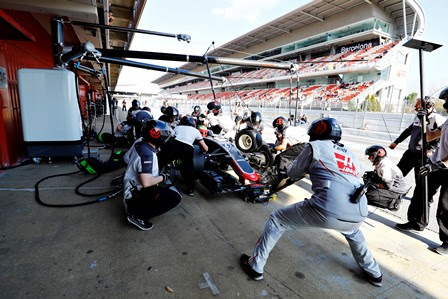 The Haas F1 Team give insight into the true nature of the team’s relationship with it’s title partner Haas Automation.

our race team is testing in another country. It’s after normal business hours. You need to machine some parts. And you need to do it now.

The newest participant in the FIA Formula One World Championship and the first American-led Formula One entry in 30 years, Haas F1 Team is currently testing at the Circuit de Barcelona – Catalunya to prepare for the season-opening Australian Grand Prix March 20 in Melbourne. And as part of that test, the organization is learning about its racecar and equipment, exhaustively trying it all out to avoid any malfunctions when on-track activity begins in Melbourne.

As part of that process, the team is finding better ways to do things. Enter the Haas Factory Outlet (HFO) in Barcelona.

Through the first of two scheduled test sessions beginning Feb. 22 and ending March 4 at the 4.655-kilometer (2.89-mile), 16-turn circuit, Haas F1 Team has literally called on its partnership with Haas Automation, the largest CNC machine tool builder in North America.

The quick work was perhaps the best example of showcasing Haas Automation’s product, but also its customer service, available across a worldwide footprint encompassing more than 60 countries and 1,300 employees.

“We are proving Haas Automation is more than just a sponsor – they’re a true partner in building our organization,” said Guenther Steiner, team principal, Haas F1 Team. “On very short notice, the local HFO here in Barcelona was able to put skilled technicians to work and manufacture and modify the parts we needed. We’ve achieved a high level of efficiency by tapping into the resources of Haas Automation, and it’s allowing us to make the most of our test.”