Although a high level of continuity in Formula 1’s technical regulations has enabled the team to strengthen and mature many of the design concepts developed on last year’s McLaren-Honda MP4-30, the new car also incorporates a significant number of all-new innovations. The result is a balance of remarkably elegant aerodynamic solutions with a highly space-efficient integration of Honda’s new-for-2016 power unit.

While McLaren’s race team has spent an extremely busy few months developing the MP4-31 right up to the very tight deadline dictated by the truncated modern off-season, its marketing team has also enjoyed a very strong winter, announcing a raft of prestigious new commercial deals to add to a roster of equally valued existing partners.

Joining McLaren-Honda’s partner group for 2016 will be the world-renowned luxury watch brand Richard Mille, which commences a 10-year marketing, branding and licensing collaboration.

Global luxury goods giant LVMH will continue its long unbroken association with the team, through its premium sparkling wine brand Chandon, whose rising-star identity will adorn both the MP4-31 and the drivers’ race suits.

Other important and valuable recent acquisitions include a brand-new haulage supplier, Volvo Trucks, and a brand-new technical services provider, IT Lab, while official services supplier ISS has renewed and extended its partnership. Also, official electronic communications supplier Kenwood celebrates 25 years as a McLaren partner this year. Finally, 2016 marks the second year of a 10-year alliance with KPMG.

Last but very far from least, McLaren-Honda’s preparations for 2016 have once again benefitted enormously from the unrivalled resources and expertise of ExxonMobil, which is celebrating 22 years of partnership with McLaren this year. ExxonMobil’s engineers, together with their counterparts at Honda, have been tirelessly developing pioneering new technologies and formulations of Esso fuels and Mobil 1 lubricants for the all-new Honda RA616H V6 turbo power unit, and Mobilube 1 SHC racing gear oil for McLaren’s bespoke eight-speed gearbox.

Importantly, the size and calibre of our partner roster – and its collective commitment to the team – underscores the confidence that all at McLaren have in our journey back to the podium.

“The start of a new season is always a special feeling, characterised by a lot of anticipation for the year ahead. This year is no different: I’m excited and raring to go.

“Last year the spotlight was very much on McLaren-Honda as we embarked on the first year of our renewed partnership. It was a tricky season for all of us, but we learned a hell of a lot.

“Likewise, it’s been a very productive winter for me. I’ve been training extremely hard, as usual, but also enjoying time with my family, and keeping tabs on all the hard work going on at the McLaren Technology Centre, Woking, where the McLaren guys have been doing an incredible job to get everything ready in time. The Honda boys have been working flat-out in Sakura, too.

“The aero package shows fantastic attention to detail. The whole car is beautiful in fact – it’s particularly nicely packaged from an aerodynamic point of view as I say – and I’m 100 per cent ready for the challenge ahead.”

“I really can’t wait to take the wheel of the new MP4-31 tomorrow. All Formula 1 drivers need a winter break, but I’m massively excited to get started on the 2016 season now, and I have to say the brand-new McLaren-Honda MP4-31 really looks the part.

“Moreover, having spent quite a bit of time at the McLaren Technology Centre recently, I can tell you that there’s a huge amount of palpable positive energy there at the moment, despite the challenging yet steep learning curve we all travelled along in 2015.

“In fact, the immense amount of sheer hard work that has gone into the development of the MP4-31 over the winter makes me immensely proud, and consequently I go into the new season with even more motivation and belief.

“Despite the ups and downs we saw last year, there were steady improvements all year long, and that gives us confidence in the design direction we’re taking. There are a lot of positives we can build on, and a strong platform to take forward. I’m not about to make any over-optimistic predictions – Formula 1 is far too unpredictable for me to do that – but, from what I’ve seen so far, the aero detailing on the car looks fantastic, and I’m really looking forward to beginning the process of testing those new innovations when I get behind the wheel tomorrow.” 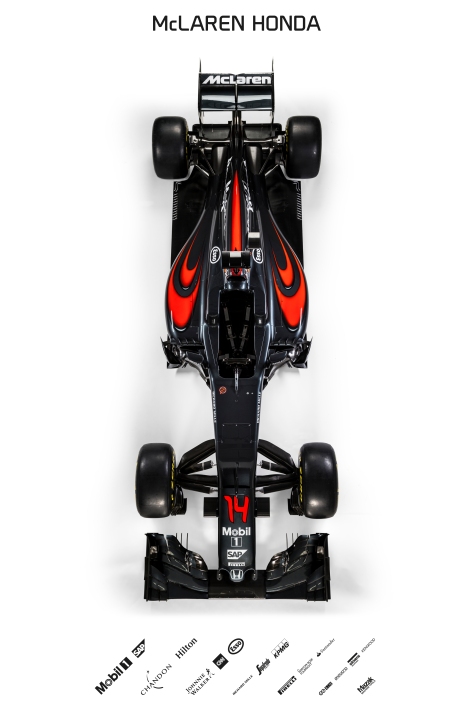 “As we embark on the second year of our renewed McLaren-Honda partnership, all of us remain united in our purpose. That purpose is to develop our team towards our shared ambition: to win.

“We’ll make no predictions as to when those wins will come, but I can say without fear of contradiction that every member of our team has worked with truly relentless dedication over the past few months. The result is that MP4-31’s developmental trajectory has been usefully steepened over the winter, and I’m consequently very proud of our team’s efforts.

“We remain resolute in our commitment to our goals, and we maintain an indefatigable commitment to the winning potential of a full works team. Believe me: the full works backing of a multinational automotive manufacturer is the only platform from which real success in modern Formula 1 can be achieved. As McLaren-Honda, therefore, we’ve vowed to work together, and to win together, and that determination has become further cemented as our relationship has deepened through the shared challenges we faced last year.

“We have the best driver line-up in the sport. We have an engineering team that has been meticulously hand-picked, restructured, guided and inspired; the blend of technical skill-sets and attitudinal mind-sets we now possess are fit-for-purpose and state-of-the-art. And, thanks to the relationships we’ve nurtured with a hugely impressive roster of loyal and powerful partners, our commercial position is equally robust.”

“First of all, we must recognise the very hard work performed over the past few months by everyone in Woking, Sakura and Milton Keynes.

“The guys have shown intense dedication throughout the winter period, and the result is that they’ve successfully kept our aggressive build and development programmes on schedule. As such, all our team members are a credit to McLaren-Honda, and consequently we’re incredibly grateful to everyone involved in the development of the MP4-31.

“But we’re never satisfied, which is why we’ve continued to strengthen our engineering team in recent weeks and months, and we’re confident that the changes we’ve made will improve and accelerate our car-development progress in the future.

“So the two Barcelona tests will merely herald the continuation of the huge collaborative task that all departments have been engaged in during the off-season. We’ll be aiming to spend the four days of the first test carefully and methodically: extracting the maximum from the time available, and concentrating our efforts on proving out our central systems, operational procedures and electronics checks. We’ll need to verify our work in the garage before we can expect any miracles on track – essentially, to ensure we walk before we can run. After all, testing is just that: testing.

“But be assured, we’re motivated and determined, and we’re pulling together.”

“From the start of tomorrow’s testing, the second season of McLaren-Honda’s new adventure begins. It was a short winter break, but nonetheless Honda was able to make the most of the off-season in preparation for 2016, strengthening our team and working tirelessly alongside the McLaren and ExxonMobil engineers.

“Learning from last year, we’ve made changes to the compressor and other hardware of the power unit during the break, maturing our overall concept from last year. Our focus will be to test the car’s balance with the new chassis and power unit, and specifically the ERS direction during the eight days of winter testing.

“We won’t know exactly where we stand until we reach the end of the two tests, but we’re looking forward to getting back on track, gathering data, and feeding back the information to our engineers so as to prepare for Melbourne and onwards.