The origin of naming the car “VF-16” goes back to the first CNC machine manufactured by Haas Automation, the VF-1, launched in 1988. The “V” stands for vertical, which is an industry standard designation for a vertical mill. Gene Haas, founder of Haas Automation, added “F1” to the name to unofficially designate it as the company’s “Very First One”.

Now as chairman of Haas F1 Team, the “F1” moniker of that first machine takes on new significance as Haas joins the 2016 FIA Formula One World Championship, becoming the first American-led Formula One team in 30 years. 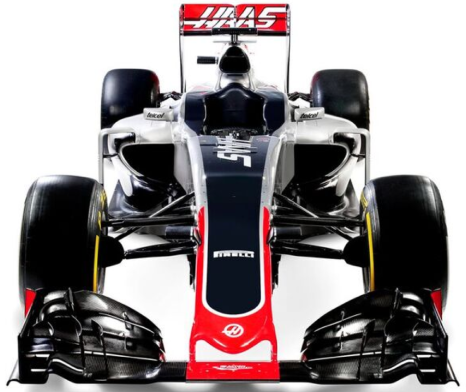 “From an international standpoint, Formula One is the highest echelon of racing, and Haas Automation builds the highest-quality machine tools,” said Haas, who has grown Haas Automation into the largest machine tool builder in North America with more than $1 billion in annual sales. “When you hear ‘F1’ you know exactly what it is – a global racing series that showcases the latest technology and attracts the best talent in engineering and design. Haas Automation has an excellent reputation in the United States and I want that reputation to grow worldwide. Connecting Haas Automation with F1 in name and in practice is the best way to grow our business and elevate Haas Automation to a premium, global brand.”

The dark gray, light gray and red-toned livery of the VF-16 was derived from the scheme of Haas Automation’s complete line of vertical and horizontal machining centers, turning centers and rotary tables and indexers. Approximately 1,300 employees encompass Haas Automation, with the Oxnard, California-based company exporting its machines to more than 60 countries. The VF-16 showcases Haas Automation’s commitment to technology and innovation to a passionate, global audience.

“Just as Haas Automation’s products continually evolve, becoming better and more efficient, our methodology behind the VF-16 was to make it the best evolution of a good F1 car,” said Guenther Steiner, team principal, Haas F1 Team. “We’re a new team, so we looked at what the successful teams were doing to give us a baseline of the direction we needed to go with our design.

“We have very experienced designers who worked hard to develop all the little things from an aerodynamic perspective that, collectively, add up to a lot. And our technical partner, Ferrari, provided our power unit, and that really defined the rear end of the car and how big it needed to be.

“Our goal with this car is to score points,” Steiner states. “First, we need to go out there and show that we can do the job, that we can finish races, that we are respected by the fans and other teams in the paddock. Then, we want to score points. That is the ultimate goal.”