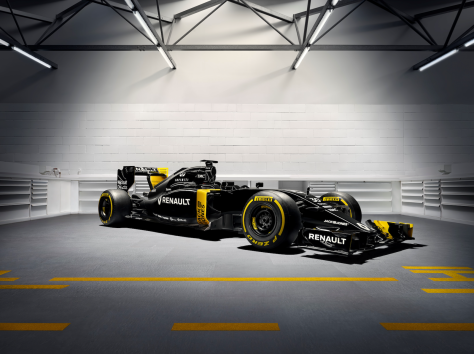 The new F1 challenger consists of the Renault R.S.16 chassis, developed and manufactured in Enstone, whilst the Renault R.E.16 power unit will continue to be developed in Viry-Châtillon.

A number of key appointments have been made in the F1 team to avoid any dilution of the specific requirements of Formula One. Bob Bell is appointed F1 Chief Technical Officer and will manage the efforts of Nick Chester as Chassis Technical Director and Rémi Taffin as Engine Technical Director. Kevin Magnussen and Jolyon Palmer are confirmed as Renault Sport Formula One Team’s race drivers, and will be supported by Esteban Ocon, who joins the team as Third and Reserve Driver.

Renault announced its partner portfolio at the event. Renault-Nissan Alliance partner Infiniti will continue its journey in Formula One alongside Renault and will enhance its involvement through a specific technology program developing the second generation of energy recovery systems (ERS) for the F1 power unit. The technical collaboration between Total and Renault will continue in 2016.

Renault also announced new partnerships with other prestigious brands, including premium watch supplier, Bell & Ross, revolutionary audio systems inventors, Devialet, clothing company Bestseller (with the brand Jack & Jones) as well as continuing relationships with the F1 team’s current partners, including Microsoft and EMC. Renault will continue its working relationship with Gravity Motorsports, an affiliate of the Genii Capital Group, which will retain a minority shareholding in the F1 team. Genii and Gravity worked tirelessly to ensure the team’s survival in extremely difficult circumstances and Renault is pleased to recognize this commitment as Gerard Lopez remains a non-executive director of the team.

It is likely that the livery seen at the launch event will evolve in the coming weeks before the season opener in Australia.