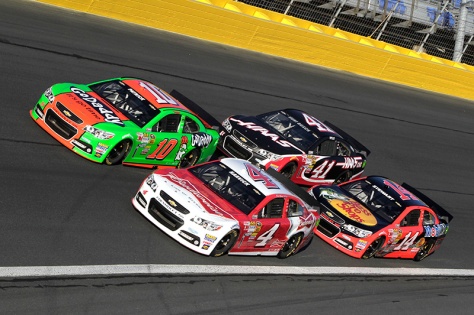 With the Formula One close season having taken hold, fans craving that motorsport fix often start to explore other racing series.  The 2016 Nascar season kicks off in a little over one month’s time and through a series of short films complied by Mobil 1 The Grid we explore the merits of the series and take a look at areas in which Nascar has the jump on F1.

Guiding Mobil 1 The Grid through this series of films is the Stewart-Haas Racing team, any Formula One fan questioning the credibility of the Haas F1 Team 2016 entry would do well to pay attention here. The shear scale of Stewart-Haas Racing operation is nothing short of breath-taking. The frenetic nature of the Nascar schedule and the teams 4 car line up means that at any given time, the team can have up to 60 race cars moving through the facility. The operation exacts the same if not greater levels of precision and commitment seen through F1.

Through levels of team access unseen in Formula One, crew team member James  Keener explains his multiple roles within the Stewart Haas Racing team and the dedication given to not only find success, but continually improve.  On the face of it the technology seen in this film may feel somewhat antiquated when compared to an F1 pitstop, but through standardising process and machinery the series have managed to ensure a process remains relatable to the customer and any focus on improvement is on the individual rather than spending money to find an extra tenth of a second. Perhaps F1 could learn from these standardised approaches.

Taking a look through the Stewart Haas Racing paint shop, we get our first indication of what the Haas F1 Racing team livery could look like. The answer pretty much anything! Unlike F1, Nascar offers it’s teams a freedom to change car paint schemes and sponsors on a race by race basis. Teams and drivers are known more by their racing numbers rather than the colours of the car, something F1 has started to emulate in over the past few seasons.  In the case of Stewart Haas Racing, the team has secured a series of long term partners, Mobil 1 being one of them. Through the livery freedom afforded to teams, cars offer partners a tool to get involved in promotional activities over the course of a season. This flexibility in colour scheme and length of agreement can be attractive to sponsors, an area in which F1 appears to be increasingly struggling.

Nascar has in the past been perceived by some as antiquated in its approach to safety when compared to other racing series. This perception could not be further from the truth. Nascar is dedicated to continuously raising the bar for the driver and the fan. Working closely with the teams and race venues great moves have been taken to reduce risk without impacting the show.

Finally, Mobil 1 The Grid profiles Danica Patrick. The first lady of Nascar. A true ambassador for the series and for women in motorsport. With the support of the Stewart Haas Racing team Danica Patrick has a established herself as a formidable competitor and within s series in which race craft is key is continually building towards delivering major success for the team. F1 teams would do well to look at long term support Stewart Haas Racing has offered Danica Patrick and how this commitment is paying off.

Nascar ignores the backroom politics and is fully focused on making the show the best it can be for its fans. With levels of access unheard of in the F1 community at a price that won’t break the bank, when you are making your motorsport holiday fix plans for 2016, Nascar deserves serious consideration.