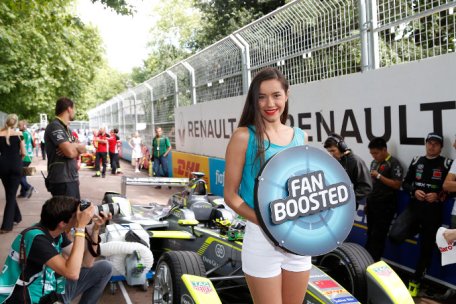 FanBoost is now open for the first race of the 2015-2016 FIA Formula E Championship in Beijing, with a new-look in-race voting initiative for this season.

To cast your vote visit www.fiaformulae.com/fanboost

Fans can vote for the driver of their choice to receive an extra speed boost during the race. In a change to last season, FanBoost now closes six minutes into the race allowing fans to make their vote count during an ePrix.

Due to the changes FanBoost is now only available in the second car after a driver makes their mid-race car swap. The three drivers with the most votes will each receive an extra 100kJ of power to be used in a window between 180kW and 200kW.

When deploying FanBoost it can only be used once, a series of short bursts will not be possible.

Follow the progress of your favourite driver via the live FanBoost leaderboard which monitors real-time voting. As well as being able to vote during the race, fans will also find it much easier to have their say as changes to the voting system will make it possible to vote using a hashtag on Twitter and Instagram.

To submit your vote using a hashtag you must include #FanBoost plus a hashtag followed by the full name of the one driver you wish to vote for.

Voting will be available through the official Formula E website and app and fans will be able to vote once a day through each of the available channels.

When does FanBoost open?

FanBoost voting will open 12 days before each race and close after the opening six minutes of the race. This will give fans and viewers an even greater ability to influence the outcome of the race.

How do FanBoost votes work?

What are the benefits of FanBoost?

The three winning FanBoost drivers will each have an extra 100kJ of energy available to them in their second car only. The extra energy is to be used in a power window between 180kW and 200kW.

What are the FanBoost restrictions?

FanBoost can only be used once. A series of short bursts will not be possible.

OPINION: Fanboost represents Formula E’s dedication to fan engagement. This evolution of the engagement tool can be seen as an assurance the fans still come first. Building functionality to capture in race votes and votes across various social media platforms requires investment and is a testament to the series listening to its fans. Purists still challenge the place Fanboost should have in racing, but Formula E isn’t limiting it’s appeal to purists. They are of course welcome, but the sport wants to introduce an new audience to motorsport. Fanboost works.

That being said, expecting fans to be able to correctly spell the name of the drivers they’re voting for could prove an entertaining challenge!